Find me in Psychology Today! 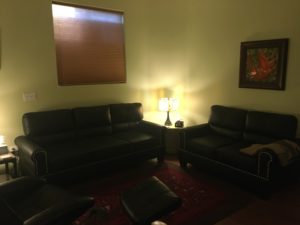 EMDR and Addiction and Mindfulness Practice 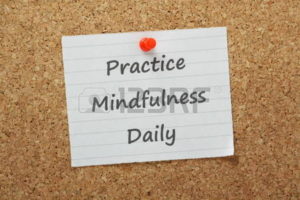 In January 2018 I completed  a training on EMDR (eye movement desensitization and reprocessing) and addictions.  There are many new protocols and tools to use to help clients process.  But there are also very old and useful tools to help people process, and a very important one is mindfulness, a term that was coined in 1881, and described as awareness and coming back to awareness.  So, mindfulness is the practice of coming back to awareness. It seems simple, yes?  But no, it is so easy for us to become lost in our thoughts, and feelings.  To have hours, days, weeks go by without noticing what is happening in the present moment. And if you think about addiction, substance use disorder, it is the opposite of mindfulness, since it numbs the body and the brain. So, the practice of mindfulness, and it is a practice, develops focus and awareness.  Whether there is an an addiction or not, mindfulness is a wonderful practice to cultivate! 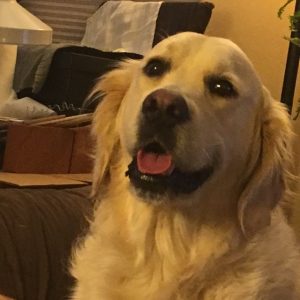 Is this not the cutest dog ever?  Whenever there is a disruption in the state of peace at our house, Cooper comes up and gives us this look.  Instead of moving away, or leaving, he moves in and loves… That is his reaction to disturbance.  What a wonderful therapy dog, for all of us!

My relentless search for skill… 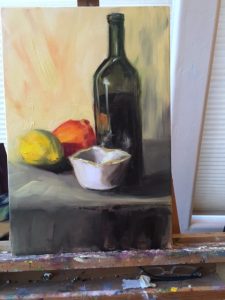 Two of my recent oil paintings, after an amazing workshop from Qiang Huang at the Sedona Ar 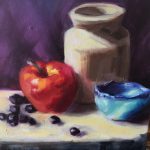 t Center in February 2016.  His work is beautiful and profound, and as a physicist he learned to create and paint in a very systematic and beautiful way, which he is now teaching throughout the US and internationally.  I was grateful to be able to take his workshop, and learn more about light, color and form. These two paintings represent some of what I learned regarding using  strong color and creating bold shadow and light. 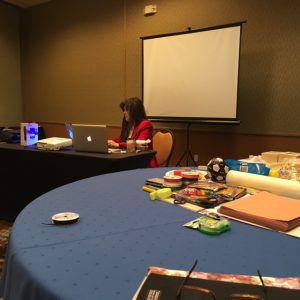 In January 2016, I took an intensive training with Ana Gomez, and became an EMDR child specialist.  We all (therapists) worked together, played together and learned together how to provide EMDR therapy with play therapy and help children who have had adverse childhood experiences, work through and begin the process of healing from trauma and complex trauma. 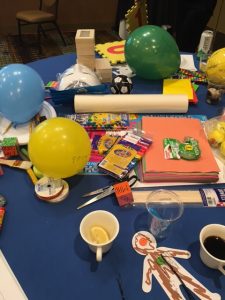 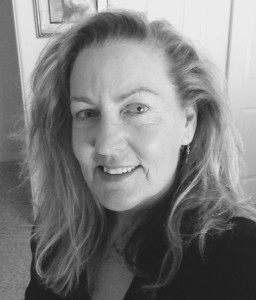 As a therapist, I am constantly looking for new and creative interventions to connect with my clients and to support them as they grow and evolve.  However, as an artist, I am always looking for inspiration and challenge myself to explore new mediums and techniques so that I will continue to grow and evolve.  This year I’ve started working in encaustics. Encaustic painting is an ancient art form that uses hot bees wax and oil pigments. I’m playing with color and experimenting.  The wax dries as soon as it hits the canvas, creating an even greater challenge.  But the color is vibrant and exciting, and there is texture as well.  The process is amazing and fun! So, today my advice is create, create, create! 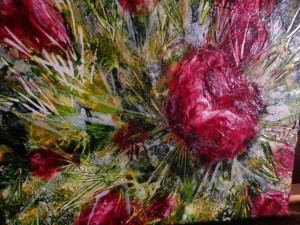 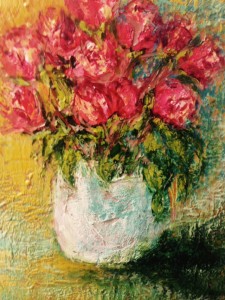 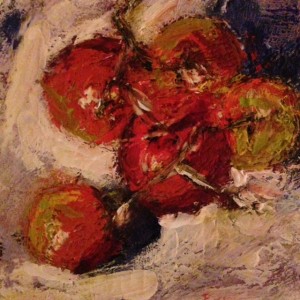 “Because trauma affects the body’s physiology, and because traumatic memories are often stored somatically, leaders in the field are increasingly insisting that trauma treatment must incorporate the body…  practitioners are able to cultivate the ability to remain present, to notice and tolerate inner experience, and to develop a new relationship with their body.  This body-based practice then has a ripple effect on emotional and mental 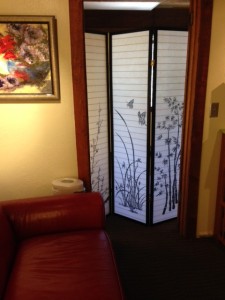 health, or relationships, and on one’s experience of living in the world.”   Overcoming trauma thru Yoga, Reclaiming your Body, by David Emerson and Elizabeth Hopper, PhD.

In March I completed a 40 hour training in Trauma Sensitive Yoga (TSY), at Kripalu in Lenox, Massachusetts.  The training was to teach yoga teachers and clinicians how to use TSY as an adjunct to psychological work being done with trauma survivors.  This particular style of yoga is a modified yoga program developed at the Trauma Center in Boston, Massachusetts.  As a clinician I am very excited to offer individual TSY sessions to my clients (or to others who are currently working with a therapist) who have experienced trauma in their lives and as a result may feel disconnected, isolated, anxious, and/or depressed.

In 2003, I was certified as an Asthanga yoga teacher, a very different type of yoga from TSY.  Still, having experience as a yoga teacher and a yoga student allows me to teach TSY effectively.

TSY can help trauma survivors begin to cultivate a more positive relationship with their bodies through mindfulness, breathing, and gentle and safe movement.  This yoga supports connecting the body and the mind, through the process of interoception, being present, creating rhythms, and having choices. The theory behind this yoga practice is physiologically technical, and I’d be happy to answer any questions and explain further about how the effects of this yoga are being studied and researched.

Dr. Bessel A van der Kolk, founder and medical director of the Trauma Center in Boston, refers to trauma as “a disease of not being able to be present.”  Dr. Van der Kolk also states, “The body keeps the score.”  Emotional pain and traumatic memories can be stored in the body long after the trauma has ended.

Using Trauma Sensitive Yoga as an adjunct to psychotherapy allows clients to experience their bodies, gently and safely.   By restoring a sense of control through choice, being in the present moment, and establishing a safe connection, the body and mind can begin to reconnect and heal. 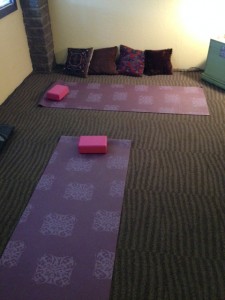 At my therapy office in Sedona, I have a private room set up for individual yoga sessions. This is a very exciting addition to my psychotherapy work, and TSY is an innovative practice that can help people move through trauma toward healing, as well as  rediscovering the natural intelligence of the body.

Please contact me with any questions or to set up an initial appointment.

What’s your attitude about failure?

I absolutely love this read! Check it out and find out what Michael Jordan has to say about success.  http://tinyurl.com/bjar5d6

All too often we see our failures as a waste of time,  wishing they had never happened.  When this is the case, not only do we miss the lesson, but also the opportunity to discover our resiliency and flexibility.  In other words, our ability to tolerate distress provides us with an internal sense of strength and confidence.  As a therapist and an educational consultant, I often see my clients believing that either they or someone else is to blame if they are experiencing emotional distress. Yet, life is naturally full of distressing experiences and learning to cope with them and see them as an opportunity to grow, is an approach worth developing. For adults, and children, understanding that there is value in failure, turns regret into success.

As Rainer Maria Rilke stated, “We wasters of sorrows! How we stare away into sad endurance beyond them, trying to foresee their end! Whereas they are nothing else than our winter foliage, our sombre evergreen, one of the seasons of our interior year.”

I received this information via email today, then later heard about the same study on the news.  Like many research studies, this one also seems to say what we already know and have known for a long time- it just seems to say it more loudly.  It’s worth the read! Mar. 12, 2012 ‹ A new study from Harvard School of Public Health (HSPH) researchers has found that red meat consumption is associated with an increased risk of total, cardiovascular, and cancer mortality. The results also showed that substituting other healthy protein sources, such as fish, poultry, nuts, and legumes, was associated with a lower risk of mortality.

The study will be published online in Archives of Internal Medicine on March 12, 2012.

“Our study adds more evidence to the health risks of eating high amounts of red meat, which has been associated with type 2 diabetes, coronary heart disease, stroke, and certain cancers in other studies,” said lead author An Pan, research fellow in the Department of Nutrition at HSPH.

The researchers, including senior author Frank Hu, professor of nutrition and epidemiology at HSPH, and colleagues, prospectively observed 37,698 men from the Health Professionals Follow-up Study for up to 22 years and 83,644 women in the Nurses’ Health Study for up to 28 years who were free of cardiovascular disease (CVD) and cancer at baseline. Diets were assessed through questionnaires every four years.

Among specific causes, the corresponding increases in risk were 18% and 21% for cardiovascular mortality, and 10% and 16% for cancer mortality. These analyses took into account chronic disease risk factors such as age, body mass index, physical activity, family history of heart disease, or major cancers.

Red meat, especially processed meat, contains ingredients that have been linked to increased risk of chronic diseases, such as cardiovascular disease and cancer. These include heme iron, saturated fat, sodium, nitrites, and certain carcinogens that are formed during cooking.

Replacing one serving of total red meat with one serving of a healthy protein source was associated with a lower mortality risk: 7% for fish, 14% for poultry, 19% for nuts, 10% for legumes, 10% for low-fat dairy products, and 14% for whole grains. The researchers estimated that 9.3% of deaths in men and 7.6% in women could have been prevented at the end of the follow-up if all the participants had consumed less than 0.5 servings per day of red meat.

NATSAP is a wonderful resource for parents looking for programs, and for educational consultants. As a member of  NATSAP, I attend this annual conference because it serves multiple functions, including networking with many educational consultants and  learning about new therapeutic schools and programs. The conference also offers clinical information and workshops about new directions in treatment of adolescents and young adults. So, not only was I able to catch up with colleagues, learn about new schools and programs and new trends in treatment, but thanks to Andy Anderson and ISPA (independent small program alliance) I  participated in the second annual STICC (Saving Teens in Crisis Collaborative) charitable golf tournament.

This year I had a lot of fun playing with Eric, from Pacific Quest, Christian from Alpine Academy, and Dan from Mountain Valley Treatment Center. We donated many golf balls to the course,  left one on top of the club house roof, and quite a few in the surrounding homes, roads and neighborhoods.   I can’t even tell you how many we left in the water. One of the highlights of the game was when I hit a low flying ball into a wooden post about 70 yards out, and it bounced off and returned almost exactly to where I stood. I kept calling it ‘clown golf.’  But  bottom line, we had a lot of laughs and tons of fun!

The rest of the week the conference proceeded on a more  educational note, and I learned more about the new DSM V,  Reactive Attachment Disorder treatment, and gaming and gaming addictions. I also enjoyed the keynote speaker Dr. John Ratey. He discussed his research about exercise and the positive effects that exercise has on us.  His message was very clear: exercise is good for emotional regulation and cognitive enhancement. He also discussed the research taking place at UC Irvine, and the study that shows that exercise helps our brains.  It is research worth taking a look at, http://news.uci.edu/press-releases/brief-exercise-immediately-enhances-memory-uci-study-finds/